Assessments in Primary PE and our Multi-sport Talent Programme

We have been quiet on this platform for FAR too long! However, we have been very busy over the past couple of years developing areas of primary PE and opportunities for juniors in sport.

Having delivered PE for the best part of a decade in primary schools we have learnt a great deal about what is going on and what is absent from a subject that, particularly after a global pandemic, should be close to the top of the Government’s list in terms of importance to children. It is obviously top of our list! It is somewhat alarming that the Government have provided a considerable amount of money to increase opportunities in primary schools (which we are grateful for!) for children to ‘get more active’ but it could be argued that they don’t actually know what ‘getting children more active’ looks like as there is no starting point! Our argument for a long time had been – ‘how can you measure progress without a definite starting point?’ This is what we have tried to address by undertaking some simple assessments with the children in some of our schools that are suitable to the environment we work in. Whilst creating the assessments, we also thought it was important to look at a variety of different areas that could assess all-round competence in PE. These assessments have been really useful for ourselves and the schools as they not only show areas where children may have to work harder in PE but also those who are excelling in particular areas. As the assessments are ongoing, they also give us the ability to monitor the progress of the children over time too – a feature which again is great for ourselves and the schools. To us, this process is not revolutionary – it is common sense. We believe such an assessment programme should be happening in primary schools across the country and then you can measure what the scale of the problem is and if you are improving it going forwards – just like you might do in another academic subject!

I mentioned briefly that the assessments could also show us and the schools who may be performing well in various areas of PE and thus they could be considered ‘Gifted and Talented’. For some primary teachers, who have to teach everything, this can be very hard to identify. If we consider the title of ‘Gifted and Talented in PE’ it has always been a lovely label to have but in many cases it hasn’t really come to anything in terms of further opportunities for the pupils. Again, we have tried to address this by offering a ‘multi-sport programme’ outside of school time for some of those who have shown potential. The thinking behind this programme is to let children try a variety of sports led by some really good coaches so that they can see what they might like and be good at going forwards instead of specialising in a particular sport too early. The danger with specialising early can be that boredom sets in, the child falls out of love with the sport and ends up giving up. I have seen this many many times with tennis. Playing a variety of sports can also help a child to ‘read a game’ more effectively – a skill which is transferable and a key ingredient to being successful in elite sport. The final element to why it might be a good idea to try many sports is that at some stage, a child could realise that they may not be good enough to play at a particular level in a particular sport but they might be good enough in another sport that they have been playing!

Our multi-sport programme has been running for a few years now and has been something that the coaches have loved being involved in as much as the children themselves! We hope to make it more accessible as we develop our model further! Some images from the programme accompany this Blog.

Finally, we hope to make our ‘Blog’ more regular than it has been previously (!) with updates about significant things that we are up to within the company! So, until next time, in the words of the nineties Boy Band, ‘FIVE’ – ‘Keep on Moving!’ 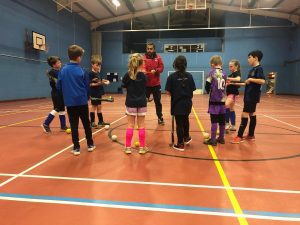